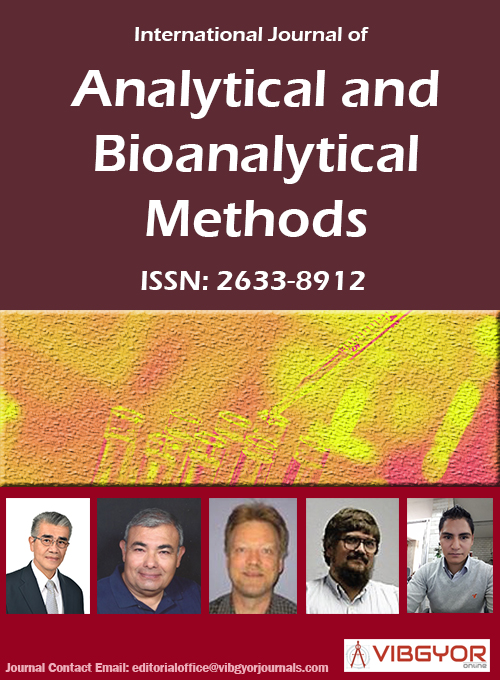 a) Gas diffusion cell (GDC) consists of two halves made from acrylic, each half having one inlet and one outlet. A polypropylene membrane is cased in a diffusion cell; (b) Inner surface of each half cell. The groove was 0.08 cm wide and 0.08 cm deep.

Figure 4: Manifold for the concentration mode.....

Table 3: Results obtained by application of the method for the analysis of fluoride in semen samples.

Copyright: © 2020 Gómez-Ruiz H, et al. This is an open-access article distributed under the terms of the Creative Commons Attribution License, which permits unrestricted use, distribution, and reproduction in any medium, provided the original author and source are credited.

Among the deleterious effects of fluorine in the human body is the alteration of the reproductive system. The measurement of fluoride in urine is usually used as a biomarker of exposure but it provides no information about is incorporation in the reproductive system. So, in order to relate fluoride with effects in male's fertility it is convenient to measure fluoride in semen.

We developed a method using and automated FIA (Flow Injection Analysis) system using a gas diffusion cell (GDC) that can be operated in two ways a) Continuous for samples with high concentration and b) An open/close configuration for samples with low concentration. The method is based on the conversion of the fluoride ion to the HMDS derivative (a gas) and permeating the gas through a membrane regenerating the fluoride ion in the acceptor current and measuring it with an Ion Selective Electrode (ISE). The method allows the measurement of fluoride in semen with low detection limits, low sample volume, but allowing a good reliability measured as %RSD: 1.6% RSD for semen samples in the open-closed configuration and 0.68% RSD for the continuous mode.

It has reported that about 1.5 million of Mexicans are exposed to high levels of fluoride (1500 mg/L) in drinking water [1] This constitutes a serious health issue.

The determination of fluoride has been simplified by the development of ion-selective electrode (ISE) potentiometry, however, ISE must be used carefully and results must be interpreted cautiously, since an ISE may be affected by numerous analytical interferences which may either increase or decrease the apparent analyte concentration, or which may damage the ISE [5]. For this reason, many kinds of samples containing fluoride must be treated before its determination. Separation of fluoride by distillation is time-consuming; moreover, the distillate is so highly diluted by the steam-condensate that the sensitivity of the analysis is lowered significantly [6]. New methods are aimed to eliminate the need of the distillation step. Non-chromatographic continuous separation techniques appear to be a very promising alternative, since they can improve both the sensitivity of a method by including concentration steps and the selectivity by avoiding matrix effects of interferents [7].

To perform such analysis, means many samples that should be processed in short periods of time, so any method development should consider parameters as simplicity, speed, ease of operation, and above all high precision and accuracy. If the results are going to be used to define policies for health improvement.

In the present work, a method for the fluoride determination in biological samples that can operate in two ways: a) Continuous mode for samples with high concentration and b) An open/close mode for samples with low concentration, was developed. The method is based on the conversion of fluoride to the volatile trimethylfluorosilane (TMFS) using hexamethyldisilazane (HMDSA) in an acidic medium. TMFS formed in the reaction evaporates and diffuses through a polypropylene membrane, cased in a diffusion cell (Figure 1), to be absorbed into a sodium hydroxide acceptor stream [8] at the upper part of the diffusion cell. A fluoride-selective electrode then is used for the final measurement of the fluoride ion [9]. This operation mode is the continuous mode. For the fluoride determination at low levels in semen, an open-closed configuration is proposed. The volatile TMFS formed in the lower part of the gas diffusion cell diffuses through the membrane to be absorbed in the stationary acceptor enclosed in the sample loop of a second injection valve, where it is continuously concentrated previous to the measurement in the ISE.

The combination fluoride-selective ion electrode (Orion 960900) was fitted in a flow cell (Figure 2) with an internal volume of 100 μL. The potential was monitored in a Cole-Parmer digital bench top pH meter coupled to the data analysis of an OI Flow Solution 3000 instrument.

Fluoride Stock solution - A 1000 mg/L fluoride solution was prepared from sodium fluoride (Merck). Fluoride standards in the range 0.5-10.0 and 0.02-0.10 mg/L were prepared by appropriate dilutions of the stock solution. A 10% (v/v) solution of 1,1,1,3,3,3-hexamethyldisilazane (HMDSA Aldrich) in 2 M H2SO4 (J.T. Baker) was prepared daily by measuring out a volume of the acid solution into a flask, and adding the appropriate volume of HMDSA and stirring for 5 minutes. After standing for 15 min, the upper organic layer is discarded, and the aqueous solution is used for the test. A 0.05 M sodium hydroxide (J.T. Baker) solution is used as the acceptor stream. A 0.2 M acetic acid (Merck)-0.1 M potassium chloride (Merck) solution is used in order to keep the pH and the ionic strength constant.

Two manifolds were used in the determination. The schematic diagram for the continuous mode is shown in Figure 3. The sample or standard solution is injected in a 2M H2SO4 stream and merge with HMDSA/H2SO4 solution to form trimethylfluorosilane (TMFS). The reaction takes place in a 300 cm reactor coil made from Teflon tubing (i.d. = 0.7 mm, with a coil diameter of 1.5 cm) thermostated at 90 ℃. The volatile TMFS formed is directed to the lower part of the gas diffusion cell, where it diffuses through the polypropylene membrane and is redissolved by the NaOH stream. The outlet of the upper part of the gas diffusion cell is merged with the CH3COOH-KCl stream and moves toward the detector.

When the concentration (open/close) mode is used, the acceptor portion of the gas diffusion module constitutes the injector sample loop of the injector valve 2 (IV2). The sample or standard solution is injected with the injection valve 1 (IV1) in a 2M H2SO4 stream, and merge with HMDSA/H2SO4 solution to form the TMFS in the 300 cm coil thermostated at 90 ℃, as shown in the lower half of the manifold of Figure 4. After 1:30 min has elapsed, before the injection, the selection valve (SV) is switched to maintain the system closed. The volatile TMFS formed is directed to the lower part of the gas diffusion cell, diffuses through the membrane to be absorbed in the stationary acceptor stream enclosed in the sample loop of the IV2, where it is concentrated. The plug of sample or standard solution in the closed system passes through the thermostated coil and the gas diffusion cell iteratively for a predetermined time (Table 1). After the required concentration time, the IV2 is switched to the inject position, the carrier passes through the sample loop, flushes out the fluoride and merge with the CH3COOH-KCl stream for its potentiometric determination in the upper half of the manifold. SV1 is then switched to the open position so that the loop can be refilled with fresh HMDSA/H2SO4 solution and another fluoride injection can take place.

Chemistry of the reaction

The reaction for generation of the volatile compound is:

The chemical reaction of the absorption of TMFS in the basic solution is:

The reactions thermodynamics favor the formation of products in both cases. Because FIA measurements do not require that equilibrium be reached, it is important that the reaction rapidly generates enough concentration of products.

The optimization of the method included the study of a series of variables grouped in those related to the chemical characteristics (HMDSA concentration), physical (temperature) and due to the dynamic system (volume of injection, flowrate, and reactor length). Range and optimum values of these variables are listed in Table 1.

The HMDSA solution was first prepared according with what was reported by I. Papaefstathiou, et al. and TJ Cardwell, et al. [8,9] for standards and samples prepared in aqueous solutions, the concentration of HMDSA where adequate, but in the case of semen samples it was not enough, and the recovery of fluoride ion in samples with standard additions in the open configuration produced lower values than what was expected.

The length of the thermostated reaction coil was studied in an interval between 100 and 330 cm. Reactors longer than 300 cm did not improve the increment in the signal.

The effect of the flowrates of the donor and the acceptor streams and the injection volume was also studied and optimized.

With the optimized method, standard solutions of fluoride in the range 0.2-1 mg/L were injected. Graph 1 show the calibration curve obtained by plotting measured potential (mV) as a function of the logarithm of fluoride concentration. The relative standard deviation calculated with the signal obtained of 11 injections of solution 0.6 mg/L F- is 0.68% RSD.

To allow the enrichment/concentration of the fluoride ion in the basic solution stream, keeping constant the flow at the surface of the electrode to avoid irreproducibility of the sensor response due to changes in the ionic strength, the injection valve IV2 was positioned in so that there is always a continuous flow of the electrolyte solution through the ISE. In the filling position of this valve the flow through the system is continuous, except in the loop of the valve, which constituted the upper part of the diffusion cell; the flow through is restored by switching the valve to the inject position, after the required concentration time.

A concentration time of 3 min., corresponding to 4 cycles of iterative pass of the plug through the thermostated coil and the gas diffusion cell, under these conditions the highest signal and the best results were obtained.

Graph 2 shows the calibration curve obtained by plotting measured potential (mV) as a function of the logarithm of fluoride concentration. The relative standard deviation calculated with the signal obtained of 11 injections of solution 0.06 mg/L F- is 1.6% RSD.

The results obtained in terms of dynamic range, correlation coefficient, detection limit and precision for the proposed method, with and without concentration are listed in Table 2.

Application of the method to real samples

To show the applicability of the method, samples from workers on the San Luis Potosi area where analyzed. Figure 5 show signals obtained with fluoride standards solutions and semen samples Table 3 resumes the values of fluoride obtained in 28 samples, in all the cases the concentration mode was used. In the case of sample 05 VH the values where so large that a new calibration curve was prepared in the range 1 to 8 mg F-/L for this sample so to measure the concentration of fluoride.