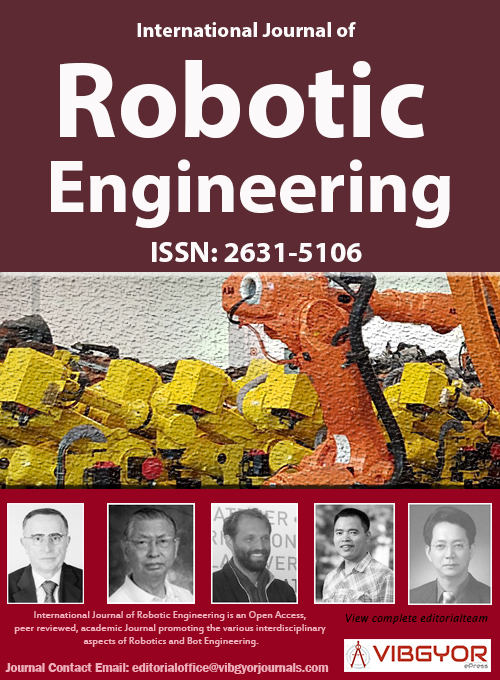 Fractional Order Control for the Grasping by Coiling

Figure 3: Geometrical parameters of the arm....

Geometrical parameters of the arm segment.

Copyright: © 2020 Ivanescu M, et al. This is an open-access article distributed under the terms of the Creative Commons Attribution License, which permits unrestricted use, distribution, and reproduction in any medium, provided the original author and source are credited.

The paper studies the grasping control by coiling for a class of grippers with continuum arms. First, the fractional order model of continuum arm is proposed. The viscoelastic components are assimilated by the fractional Kevin-Voigt model and the fractional-order dynamics are inferred. A hybrid control technique with two control loops for position and force control, respectively, is proposed. The Lyapunov method for position control is applied. Sector-type constraints for input torque are implemented and frequential conditions, Popov Circle Criterion, that ensure asymptotic stability, are inferred. A conventional PD controller is proposed for the force control. Numerical simulations illustrate the performances of the control system.

In this paper, a class of arms with continuum elements that performs the grasping function by coiling is analysed. This function is often met in the animal world as octopus tentacle, the elephant's trunk or constrictor snakes. In robotic applications, this function is used to manipulate objects with geometric shapes that contain borders with concave areas (Figure 1), to objects with certain fragility and resistance to manipulate, etc. In this area of application, the architectures of continuum arm type play an important factor in determining the control laws. The specialized literature contains a large number of papers addressing the study of these models known as systems with distributed parameters. A summary of these results can be found in [1]. Among the pioneering works we can mention [2-4] which introduce the basic concepts of these models, the state equations. The dynamic models and the control laws for constrained motions are inferred in [5,6]. In [7] are discussed kinematic algorithms to avoid the obstacles of hyper-redundant manipulators. An extension of Jacobian based methods for infinite dimensional systems is presented in [8]. In [9] are studied the grasping configurations of continuum arms. Similarities of these systems with certain classes of biological models are analysed in [10]. Kinematic control for real time implementation is discussed in [11]. Sliding mode control techniques for hyper-redundant robots are studied in [12]. Architectures based on concentric tubes for the continuum arm are presented in [13]. Spatial weight error control for a class of hyper-redundant robots is treated in [14]. Shape control of the tentacle robots is presented in [15,16].

This paper studies the grasping control by coiling for a class of grippers with continuum arms. First, the fractional order model of continuum arm is proposed. The viscoelastic components are assimilated by the fractional Kevin-Voigt model and the fractional-order dynamics are inferred. A hybrid control technique with two control loops for position and force control, respectively, is proposed. The Lyapunov method for position control is applied. Sector-type constraints for input torque are implemented and frequential conditions that ensure asymptotic stability, similar to the Popov Circle Criterion for classical systems, are inferred. A conventional PD controller is proposed for the force control. Numerical simulations illustrate the performances of the control system.

The main component of the grasping system is the continuum arm that manipulates the object by exerting a sufficiently high pressure on the contact surface so that it can execute its displacement on a predetermined path. We denote this system as "Continuum Arm Grasping System (CAGS)". CAGS can achieve any position and orientation in 3-D space to surround the manipulated load on the surface of different geometric shapes. CAGS constitutes the terminal component of a conventional robot intended for current part handling functions. The present work is focused only on the control of the grasping operations.

The main component of the CAGS mechanical structure is a long flexible backbone. It is surrounded by an elastic envelope and a viscoelastic solution fill the whole system ensuring a large flexibility (Figure 2). The actuation system consists of antagonistic Bowden cables with DC motor driving. The mechanical architecture is composed of several segments with independent Bowden cable driving system that allows a decoupled control strategy for each arm segment. The measuring system consists of two components: A measuring system of the geometric parameters of the orientation of the arm and one for measuring the compression forces during the grasping operation. The first system is achieved by measuring the lengths of the Bowden cables [16]. The second system is consisted by an array of Force Sensitive Resistors (FSR) (Figure 2). They are constructed of several thin flexible layers that varies in resistance as pressure is applied and released [17].

The backbone of the arm is defined by a 3-dimensional curve C and a length parameter s, , , where l is the length of the arm. The arm orientation is given by two angles , , defined by a right-handed orthonormal basis vector , where is parallel to a base coordinate frame, Figure 3.

Where is the Caputo fractional derivative of order β. The dynamic model is derived by using Lagrange equations [5,14] for this class of hyper-redundant arms. We consider a light weight arm with following parameters: is inertial rotational density, E is equivalent elastic modulus and I is the moment of inertia. It is assumed that during the grasping operation, the arm is subjected to a disturbance, the moment m, distributed along the contact surface. In terms of the orientation variables this model can be rewritten as

The boundary conditions are determined by the driving moments,

The nonlinear term is determined by the gravitational component and satisfies the constraints [14,15].

Where, is a positive constant. The system output is evaluated as a weighted average

Where and is an eigenfunction of the operator . The aim of the control problem is to ensure the movement to the target position represented by the curve ,

The evolution error will be

The following fractional order model can be inferred from (9)-(12) (for simplification of notations the index i is eliminated starting from here),

The control of the grasping operation is a hybrid control system, position-force control that comprises two phases. In the first phase, the free movement of the arm, without contact with the object, is controlled to the target position (Figure 4), in the second phase; the grasping operation is performed, the arm exerting on the object the needed compression force. The control system is shown in Figure 5.

Where define the new sector parameters.

Where the following notations were used: , , P is a solution of Lyapunov equation, I is the unit matrix, and is a constant that satisfies the condition

Consider that to be the circle in the complex plane (Figure 6) defined by the points and . In this case, the condition (26) can be defined as: all points of plot of must be outside the circle , or as the plot of does not intersect (Figure 6).

Because defines the frequency characteristics of the arm and represents the input constraints, the stability condition can be rewritten as:" the both domains must not intersect".

The relation (28) can be considered as an extension of the Popov's Circle Criterion for this class of fractional order models [22].

By evaluating this inequality along the solutions of (19), results

Substituting this result into (33), after simple calculations, considering the control law (19), it follows that

Assume that is the measured distributed force, , is the desired, needed grasping force. The weighted average of the error is evaluated from (6) as

Where are the equivalent coefficients obtained from (8).

Where are positive gains of the controller that satisfy the conditions:

Where are positive constants . that verify

Proof: The proof is simple and is obtained by Lyapunov conventional techniques [22,27].

Consider a grasping control problem for a 2-D motion in a horizontal plane (Figure 7). The following parameters characterize the mechanical system: the length of the arm segment , the rotational inertial density , the bending stiffness , equivalent Kelvin-Voigt model coefficients: , . The fractional order model (12)-(15) will be

From (6), the constraints of the compression forces are assumed as

The system is fractional order stable but is not Hurwitz stable [28-30]. The matrix is selected to satisfy the condition (22) and the behaviour of the nonlinear model is characterized by . A control law (20) is applied with , , , , . The condition (24) is verified for , MATLAB/SIMULINK and techniques based on the Mittag-Leffler functions are used for the simulation [31,32]. A weighting eigenfunction is used. Initial position is and the target position is defined as

In Figure 8 are shown the error trajectories for position and velocity . The good quality of motion can be remarked from this imagine.

The grasping force control is obtained for with a spatial weighting average . A control law (42) with is used. The trajectory of the force error (39) is shown in Figure 9.

The dynamic model of the continuum arm is associated with the light weight model, for which the gravitational component has a small influence. If this component increases, the stability conditions are getting worse.

In Figure 10 are shown two plots of the linear and nonlinear continuum arm models, respectively. We remark that the nonlinear component moves the plot of to the left, toward the circle C which leads to a decrease in stability. For high value of nonlinearity coefficient , when intersects the circle C, the system becomes unstable.

The paper studies the grasping control by coiling for a class of grippers with continuum arms. First, the fractional order model of continuum arm is proposed. The viscoelastic components are assimilated by the fractional Kevin-Voigt model and the fractional-order dynamics are inferred. A hybrid control technique with two control loops for position and force control, respectively, is proposed. The Lyapunov method for position control is applied. Sector-type constraints for input torque are implemented and frequential conditions that ensure asymptotic stability, similar to the Popov Circle Criterion for classical systems, are inferred. A conventional PD controller is proposed for the force control. Numerical simulations illustrate the performances of the control system.