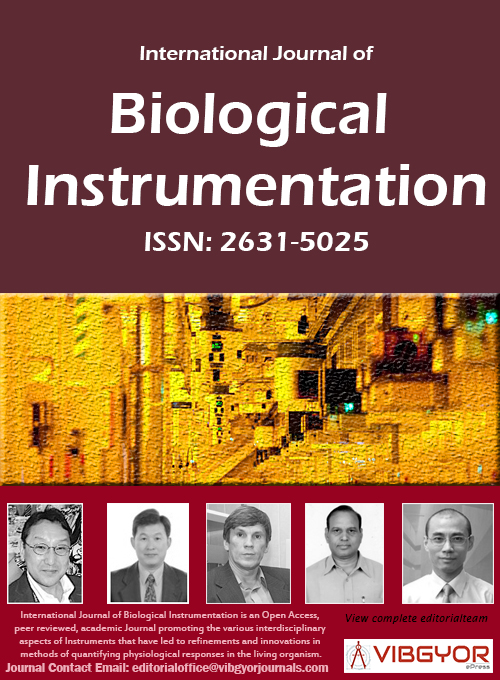 Fluoroscopic images, including AP a) And lateral; b) Views, of the UBC filled with a calcium phosphate bone void filler.

Postoperative plain radiographs, including AP pelvis a) And lateral view of the left hip; b) Obtained 4.5 years after surgery, demonstrating healing and remodeling of the proximal femoral cancellous architecture without evidence of residual UBC.

Copyright: © 2018 Lindsay EA, et al. This is an open-access article distributed under the terms of the Creative Commons Attribution License, which permits unrestricted use, distribution, and reproduction in any medium, provided the original author and source are credited.

Unicameral Bone Cysts (UBCs) of the proximal femur are commonly treated with supplemental fixation to avoid the occurrence of pathologic fracture. Occasionally circumstances permit treatment without the need for a more extensile approach with fixation. This case report illustrates successful management of a proximal femoral UBC following a single injection of calcium phosphate bone void filler without instrumentation.

Unicameral Bone Cysts (UBC) are often identified incidentally as a consequence of pathologic fracture due to insufficiency of the skeletal architecture at the site of involvement [1,2]. When the cyst involves long bones of the lower extremity, treatment options are often dictated by the occurrence of the fracture as well as the anticipation of the persistence of the cyst following fixation or immobilization [3,4]. However, a UBC might occasionally be identified as an incidental finding prior to fracture. Treatment decision making therefore must take into account the relative likelihood of impending pathologic fracture as well as the latent or active behavior of the cyst [3,5,6]. This case report presents the rationale and technical approach to the successful treatment of a proximal femoral UBC in a young child with a single injection of calcium phosphate bone void filler without supplemental fixation.

A four-year-old boy from China presented to a tertiary pediatric medical center in the United States following the incidental finding of a proximal femoral UBC on plain radiographs. Approximately one year prior to presentation, he had a self-limited episode of limping and pain in the left hip and thigh with no history of trauma. By the time the cyst was discovered the boy had no symptoms and was unrestricted in all activities, including aggressive play. Physicians in China recommended open curettage and autologous bone grafting of the cyst supplemented by internal fixation. The family travelled to the United States for a second opinion. Alternative treatment options were reviewed with the family. These included cyst injection with or without supplemental fixation [3,7,8]. The risks and benefits were discussed with the family, including the potential need to cross the proximal femoral growth plate with fixation which may lead to growth arrest [7]. The alternative of cyst injection with a calcium phosphate bone void filler was considered in this case. These materials may be mixed in liquid form and then solidify at body temperature into a crystalline structure which resembles hydroxyapatite [9]. Biomechanical properties include an average compressive strength of 26.5 ± 5.3 mega pascal (MPa) and tensile strength of approximately 4.3 MPa [10]. This treatment option was offered in light of the child's current absence of symptoms, high level of activity, the latent appearance of the cyst, and the assurance of the family that they would be able to restrict the child from aggressive play for approximately 3 months after surgery [11]. The child's family elected for aspiration and injection of the cyst with a calcium phosphate cement without supplemental fixation.

Following informed consent and preanesthetic assessment which confirmed that the child was American Society of Anesthesiologists (ASA) class 1 with no allergies, the procedure was performed under general anesthesia. The child placed in a supine position on a flat top image table. Using 1.5 mm guide pins from a 4.5 mm cannulated screw system, two were passed from a lateral, trochanteric approach into the superior and inferior aspects of the proximal femoral cyst. The pins were then over drilled using a 2.7 mm cannulated drill bit through the lateral cortex of the femur, without violating the cyst (Figure 1). The cyst was subsequently entered using two 11 gauge bone marrow biopsy needles which were passed over the guide pins. When the guide pins were removed from the biopsy needles, a translucent, amber-appearing fluid was noted to egress from the cyst. The cyst was then injected with a 50% radio-opaque contrast solution mixed with sterile saline and there was noted to be complete filling with no evidence of septation or loculation. After this was accomplished, the contrast was irrigated with sterile saline solution and the cyst was injected with 5 ml of SRS Norian, DePuySynthes, West Chester, Pennsylvania. The procedure was conducted using C-arm fluoroscopy to ensure complete filling of the cyst (Figure 2). It should be noted that none of the injectable material was placed into a joint space or outside of the bone cyst. The 11 gauge bone marrow biopsy needles were removed, the incisions were approximated with adhesive tape strips, and sterile dressings were applied. There were no intraoperative complications and the estimated blood lost was < 1 ml.

Postoperatively, the family was given activity restrictions for 12 weeks. The child was given a walker and wheelchair with toe touch weight bearing status. The child remained in the United States for outpatient clinic for follow-up 1 week after the procedure and then returned to China. Periodically, they obtained AP pelvis and lateral hip radiographs were obtained at their local physician's office at 3, 6, and 12 months. They returned to the United States 4 1/2 years after surgery for late follow-up and long term outcome assessment.

At final follow-up, the child had normal gait, without evidence of limping. He demonstrated full passive range of motion of the both hips with no tenderness, deformity, or instability and without limb length inequality. The radiographs showed resolution of the bone cyst with maturity of the previously injected calcium phosphate injection mass. In comparison to previous X-rays, there was the appearance of marginal creeping substitution of the previously implanted calcium phosphate material with viable appearing cancellous bone (Figure 3). The family was reassured that there appeared to be complete resolution of the UBC and they were informed that there would be no further need for follow-up.

Unicameral cysts are benign, solitary, often expansive, fluid-filled lesions of bone. The pathophysiology of UBC formation was proposed by Cohen to be caused by a venous obstruction at the metaphysis of a long bone caused by trauma, malformation, or inadequate collateral circulation resulting in increased intraosseous pressure and expansion of the cyst [1,2,12]. The composition of the fluid of UBC, suggests active inflammation and bone resorption as result of increased prostaglandins, interleukin-1, and other proteolytic enzymes by Koniya [13-15] Although it may occur in any bone, it is very often it located in the metaphysis of long bones in children and adolescents with the most common locations of the proximal femur and proximal humerus. The presence of the UBC creates thinning and weakness of the bone which results in an increased risk for pathologic fracture [3,4,16]. Because of this, the diagnosis is usually made after a fracture occurs, although the lesions are sometimes discovered incidentally. UBCs commonly affect children and adolescents during the first 2 decades of life [4,17,18].

UBCs have a moderate rate of persistence, despite treatment efforts, particularly if they are identified in an active, as opposed to latent, state. This often necessitates treatments to improve bone strength, stimulate bone healing, decrease enzymatic bone destruction, and prevent pathologic fracture. Treatment options include open curettage with autologous or allograft bone grafting, injection with methylprednisolone acetate or autologous marrow, trepanation, or trans-cyst fixation which theoretically reduces the internal pressure of the cyst, improves blood flow, and decreases the risk for a pathologic fracture [19-22]. One previous study assessed the efficacy of a single injection of calcium phosphate bone void filler which hardens at body temperature into an osteoconductive matrix of calcium hydroxyapatite, which can be injected percutaneously into the UBCs through large bore needles [3]. The study demonstrated that this was safe and efficacious treatment for UBC in children and had a low rate of cyst persistence [3]. Other investigators have demonstrated the biomechanical properties of various formulations of calcium phosphate cements [11].

In this study, we report the successful outcome of a latent proximal femoral UBC in a child following a single injection of calcium phosphate bone void cement [11,23]. The complete resolution of UBC by clinical and radiographic evaluation 4 1/2 years after infection and the avoidance of pathologic fractures attest to the viability of this technique when used for the proper indications. This treatment obviated the need for a traditional approach of a more extensive open surgery or fixation crossing the growth plate, which likely would have resulted in another surgery to remove the fixation. We therefore conclude that a single percutaneous injection of calcium phosphate cement for latent proximal femoral UBCs, incidentally discovered without fracture, is a safe, effective, and minimally invasive alternative when augmented with activity restriction and protective weight bearing.