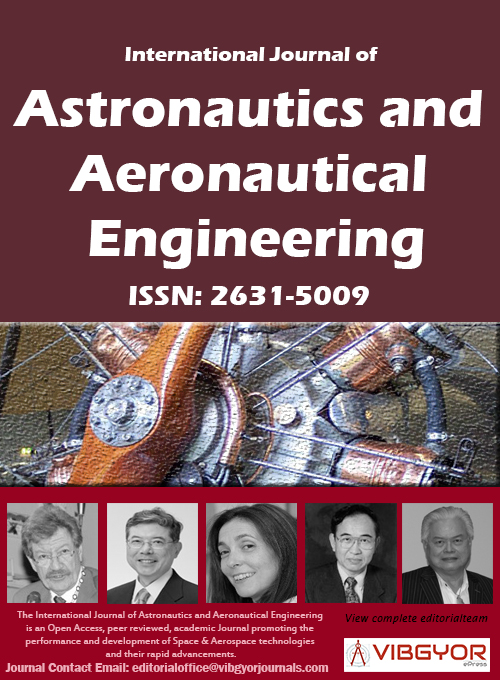 Copyright: © 2019 Jemitola PO, et al. This is an open-access article distributed under the terms of the Creative Commons Attribution License, which permits unrestricted use, distribution, and reproduction in any medium, provided the original author and source are credited.

Computational studies at the conceptual design level were performed to investigate the longitudinal trim of a Box wing aircraft. The analysis was intended to show the points in the envelope at which the aircraft could be trimmed longitudinally. A similar analysis was performed on an equivalent conventional cantilever aircraft. The results suggests that further optimization is required for the Box wing as its trimmable flight envelope is smaller than that of an equivalent conventional cantilever aircraft.

AIRCRAFT configurations such as the Box wing and Joined wing, studied by Wolkovitch [1], Kroo, et al. [2], Nangia, et al. [3] and Henderson and Huffman [4] have elicited renewed interests in unconventional configurations. The attraction of unconventional aircraft configurations like the Box and Joined wing aircraft lies in their reduced induced drag with potential for improved fuel efficiency and hence reduced direct operating costs. The Box wing is derived from biplane configurations and has been investigated by Prandtl [5], Munk [6] and recently Frediani [7] and Balaji, et al. [8]. The superior aerodynamic efficiency of Box wing designs over conventional configurations is well covered in their studies. Frediani's [7] study of the Box wing hinted that the Box wing aircraft's longitudinal trim should be practicable. It was therefore instructive to investigate the longitudinal trim of Box wing aircraft and how it compares to an equivalent conventional cantilever aircraft. The object of trimming is to bring the forces and moments acting on the aircraft into a state of equilibrium; a condition when the axial, normal and side forces, and the roll, pitch and yaw moments are all zero [9].

The baseline Box wing aircraft used in this work is derived from a conceptual design study of a medium range Box wing aircraft carried out in Cranfield University and outlined in Smith and Jemitola [10]; see Figure 1. It is a 4000 nautical mile range Box wing airliner with a maximum take-off mass of 127760 kg and wing span of 37.6 m. The fore and aft wing gross areas are 118.32 m2 each. The wing gap, measured at the wing tips, is 8.0 m while the fore and aft wing sweep angles are 40 and -25 degrees respectively. Overall fuselage length is 46 meters and maximum diameter is 5.6 m.

As a basis for comparison and to validate the method-ology, a conventional cantilever wing aircraft similar to the B767, and obtained from Jemitola [11] was studied, see Figure 2. It is also a 4000 nautical mile range airliner but with a maximum takeoff mass of 136000 kg and wing span of 47.0 m. The wing gross area is the same as the sum of the fore and aft wing areas of the baseline Box wing aircraft at 236.64 m2, while the wing sweep angle is 30 degrees. Overall fuselage length is 46 meters and maximum diameter 5.6 m.

The trim analysis described in this paper was performed following the procedure shown in Figure 3. Accordingly, mass statements from the reference aircraft were used to produce the mass and cg situations of both aircraft and subsequently the aircraft inertia statements. As outlined in Bruhn [12], the inertia of each aircraft's component was first of all determined about its own centroidal axis then about the axes of the aircraft. For this conceptual level investigation, only the inertia statements for both aircraft at OEM plus 33% payload were produced for the investigation. Aerodynamic data were generated for the reference aircraft from empirical and analytical methods. The data required were:

3. Fore wing trim drag variation as a function of AoA and elevon deflection.

4. Aft wing trim drag variation as a function of AoA and elevator deflection.

Serials 1 to 5 above were initially computed using methods given by Roskam [13], ESDU74011 [14] and ESDU89029 [15]. However due to the complexity and volume of computations required, Javafoil [16] was used after the initial set of computations. Javafoil [16] is a software based on the potential flow and boundary layer theory and used for the aerodynamics analysis of airfoils and aircraft models. The results from Javafoil [16] were in agreement with hand calculations.

The engine data required were thrust as a function of mach number, altitude and engine throttle setting. These were computed using methods given by Yechout, et al. [17].

The values of the foregoing computations for the Box wing and conventional aircraft were used to build the aircraft models in J2 aircraft dynamics software [18] as a prelude to the trim analysis. J2Universal software [18] suite is a tool kit that can be used to perform trim analysis of an aircraft. It utilizes strip theory to automatically calculate total aerodynamic coefficients and derivatives. J2's algorithms are almost entirely based on work by Roskam [19]. Trim and response analyses were thereafter performed and the results analyzed.

Trimming analysis was performed for the Box wing and conventional aircraft models with a representative 33% payload. The analysis was performed for several points within a speed range of 0 to 240 m/s and altitude range of 0 to 31,000 ft. Trimming devices used were the elevators for the conventional aircraft and the elevators and elevons (elevator on the forward wing) for the Box wing. The Box wing's elevator and elevon work in opposition. The elevon's convention is opposite that of the elevator meaning up is positive and down is negative. The sign conventions used are shown in Figure 4 [20].

The points in the envelope at which the model can be theoretically trimmed is shown graphically in Figure 6. On the y-axis is altitude in feet and on the x-axis is true air speed in kts. Thus, this model cannot be trimmed at speeds below 170 knots in altitudes from 0 to 31,000 ft.

Figure 10 shows the points in the envelope at which the model can theoretically be trimmed. On the y-axis is altitude in feet and on the x-axis is true air speed in kts. Thus, this model cannot be trimmed at speeds below 230 kts. Additionally, at 230 kts the referenced Box wing aircraft can only be trimmed at altitudes below 6000 ft. At 270 kts, the aircraft can be trimmed at altitudes below 16,000 ft. At 310 kts the model can be trimmed only below 24,000 ft. From 350 kts upwards the model can be theoretically trimmed from zero altitude to 31,000 ft. This indicates that the trimmable range of altitu for a Box aircraft increases with increase in airspeed. Additionally, a comparison of the data shown in Figure 10 with Figure 6 indicates that the trimmable flight envelope for Box wing aircraft is much smaller than the equivalent conventional aircraft.

The trim drag of the conventional aircraft with an elevator angle of -0.22° would be much lower than that of the Box wing with elevon and elevator angles of 3.10° and -5.13° respectively. This suggests that further optimization is required for the Box wing as the high trim drag obtained from this simulation could reduce the main attraction of this configuration over conventional aircraft configuration.

The authors acknowledge the support of the Department of Aerospace Engineering, Cranfield University as well as the Air Force Institute of Technology, Kaduna, Nigeria.